Ceremonial Instruments with a Spiritual Connection
The bullroarer, turndun, or rhombus is an archaic instrument used for thousands of years into the past. It seems the whole world utilized this instrument at some point, and it may be one of the oldest in our history. These instruments can be made in many shapes and styles, and are usually made with wood, but are also made with bone, stone, and other materials.

Though many people instantly recognize this instrument as Aboriginal or Australian (from Crocodile Dundee Movies mainly), this instrument was actually used across the globe. The sound the bullroarer can create has been widely used for communication across long distances,  many cultures like the Greeks and Aboriginals utilized these in sacred ceremonies as well. Dating back into the Paleolithic period, Anthropologist Michael Boyd, has found artifacts of bullroarers on almost every continent around the world.

The Aboriginals of Australia have used this instrument since the beginning of time (in their oral history). Some aboriginal tribes consider the bullroarer a sacred instrument only used and seen by men, and the punishment to women seeing one may have been death in ancient times. Initiations and male ceremonies were the main times these unique instruments were/are used, and the sound would signal to others something sacred was happening in that area (do not disturb or come participate depending on the situation). Other Aboriginal tribes use the instrument to ward off evil spirits during burial ceremonies.

Many Australian tribes considered it’s sound the voice of the sky god, which could only be created by using a piece of a tree that held it’s spirit. 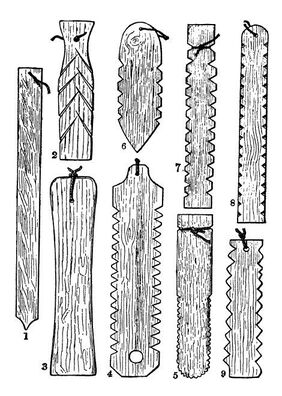 The purerehua may also be used for ritual purposes. The purerehua is traditionally used during healing rituals, or for the purpose of making rain. Additionally, the Maori believe that the purerehua is able to allow them to channel their spirits through the instrument into other worlds, and it thus serves as a device to communicate with other realms.

In ancient Greece the bullroarer was called a rhombus (meaning something that spins) and was used in sacred ceremonies as well. Mainly in ceremonies for the commemoration of their god Dionysus.

The Dogon people of Mali use bullroarers to announce the beginning of ceremonies conducted during the Sigui festival held every sixty years over a seven-year period. The sound has been identified as the voice of an ancestor from whom all Dogon are descended.

The Yoruba call the bullroarer iṣẹ́ Orò. It is usually made of camwood or bamboo and can be decorated with figurative carvings. Once consecrated it is an absolute taboo for women to see this phallic representation of the Orisha. Iṣẹ́ Orò are usually reserved for the elderly members or are kept in the shrine in the igbó or ojúbọ Orò, the sacred forest of the Orò society out of town, where only initiated men are allowed to enter.

Almost all the native tribes in Pre-Columbian cultures used bullroarers in religious and healing ceremonies and also as toys. There are many styles. North Alaskan Inupiat bullroarers are known as imigluktaaq or imigluktaun and described as toy noise-maker of bone or wood and braided sinew (wolf-scare). Shamans of the Amazon basin, for example in Tupi, Kamayurá and Bororo culture used bullroarers as musical instrument for rituals. In Tupian languages, the bullroarer is known as hori hori.

Scandinavian Stone Age cultures also used the bullroarer. In 1991, the archeologists Hein B. Bjerck and Martinius Hauglid found a 6.4 cm-long piece of slate that turned out to be a 5000-year-old bullroarer (called a brummer in Scandinavia). It was found in Tuv in northern Norway, a place that was inhabited in the Stone Age by ancient Norse people.

As you have found in the content above, many cultures around the world utilized these instruments in various contexts, from sacred to mundane. These could include such mundane uses as toys and entertainment devices for children, or sacred uses such as ceremonial tools and sacred signaling of ceremonial activities. This simple instrument has been carried with us for thousands of years, casting vibrations into the wild spaces we have lived, and currently live, across the globe. It’s amazing how such a simple instrument can have such important roles in many different cultures across the world and throughout our history.